After much toil and labor in rowing, in consequence of a strong head wind, we reached the lake at its eastern extremity. This accomplished, our next business was to find the establishment of Beach and Wood situated on some point on the opposite shore. By fortunate conjecture, our guide struck upon the right course and soon landed on Indian Point at the residence of the above named gentlemen. Here we determined to remain till we had thoroughly explored the region.  1

Thus Prof. Ebenezer Emmons described his arrival on my family’s land in 1840, captured in this sketch of Beach and Woods’ cabin by John William Hill. 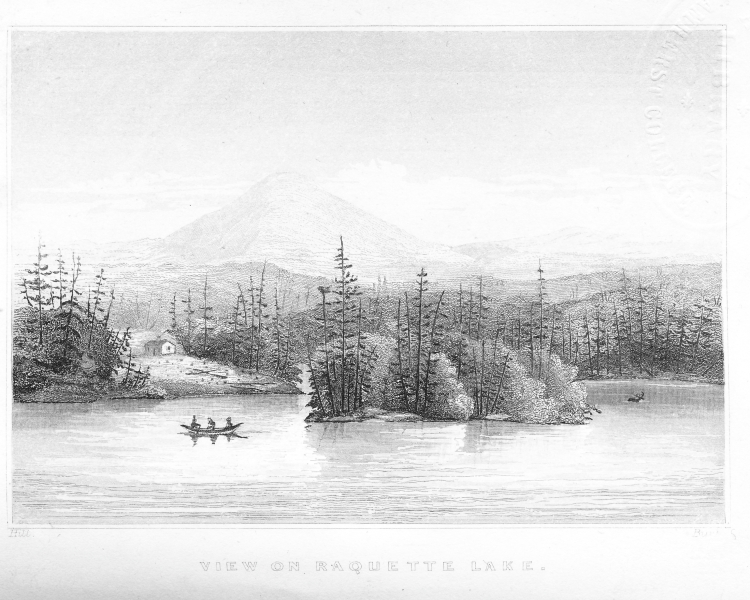 Emmons was continuing his efforts, begun in 1837, as director of the Survey of the Second Geological District to study the mineralogy, geography and geology of 10,000 acres across northern New York State.  2

The cluster of mountains in the neighborhood of the Upper Hudson and Ausable river, I propose to call the Adirondack group, a name by which a well known tribe of Indians who once hunted here may be commemorated. 3

Emmons’ term for the high peaks region was adopted and expanded to describe all of the area now known as the Adirondacks.

However, Emmons’ impact on the region is not limited to its name. In the summer of 1837, he led the first recorded ascent of the tallest mountain in New York and named it Mt. Marcy, in recognition of Governor William Marcy who appointed him to lead the survey.  4 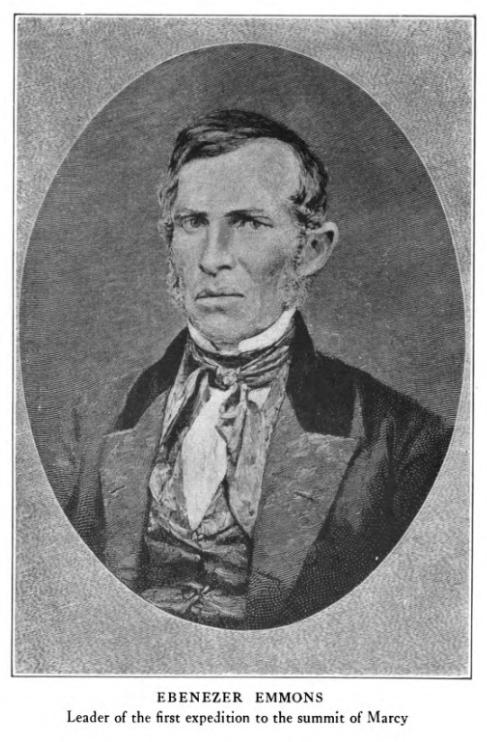 Emmons was a true renaissance scholar who took a winding path through various disciplines before taking the helm of the survey. Born in 1799 in Middlefield, MA, his fascination with the natural world began early. According to an 1896 biography published in Popular Science Monthly,

The doors in his room were covered with bugs and butterflies pinned on when he was a small boy. His mother often used to say: ‘Eb, why do you always have your pockets filled with stones? I have to mend them every week.  5

Emmons enrolled at the age of fifteen to study botany at Williams College, graduating in 1818. He then attended Berkshire Medical College and became a practicing physician in Chester, MA. In 1824, he began his pursuit of geology at the Rensselear Institute (RPI), a member of the first graduating class of 1826. That year, he published his Manual of Mineralogy and Geology, which became the instructional text at RPI. He returned to Williams to chair the Natural History department, while spending part of each year teaching chemistry and obstetrics at the Albany Medical College.  6

While traveling with Williams College President Hopkins and Hopkins’ brother Emmons’ enthusiasm for discovery got the better of him according to the 1896 biography.

Emmons asked his friends to turn aside with him to visit a certain cave. They consented to the delay, although the brother was on his way to be married, and waited just within the entrance of the cavern while Emmons penetrated to its inmost depths. After a time they heard the excited cry, ‘I’ve got it! I’ve got it! And out rushed the geologist, bearing triumphantly a muddy fragment of rock.  7

Governor Marcy selected Emmons to lead the geologic survey because of his preeminence in the field best expressed a century later by Cecil J. Schneer.

If we were to limit our study to the selection of any single individual as principally responsible for transformation of American geology it would have to be Professor Ebenezer Emmons. Emmons’ work served as a model and a standard for the geologic-stratigraphic surveys for the rest of the United States.  8

While Emmons’ work left an imprint across the country, some of his impacts on the Adirondacks were short-lived. During the 1840 expedition, Emmons travelled through the Eckford Chain of Lakes, named for Henry Eckford who originally surveyed them in 1811. Emmons named the individual lakes for Eckford’s daughters: Lake Janet (Blue Mt. Lake), Lake Catherine (Eagle Lake) and Lake Marion (Utowana Lake). For a short time, Blue Mountain was called Mt. Emmons.  Today the Marion River is the only piece still carrying the name Emmons gave it.  9 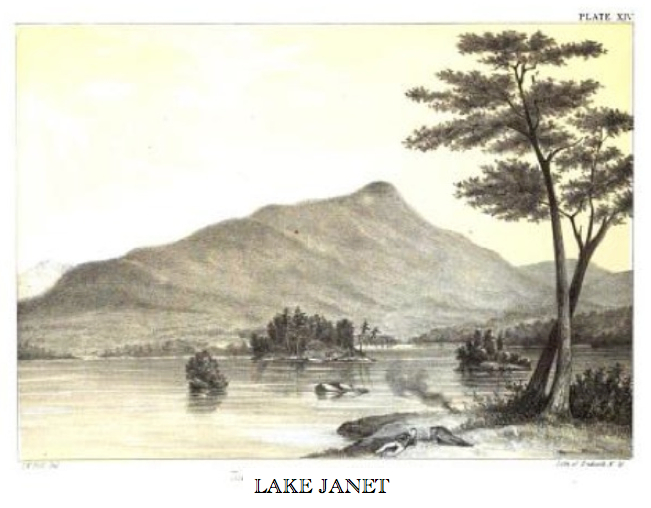 The long-term impact of Emmons on the Adirondacks has more to do with the language and art work in his Survey reports. His writing romanticized an idyllic location that previously had been portrayed as cold, swampy and dreary. His reports were accompanied by some of the first drawings to show the public the majestic beauty of the Adirondack mountains, lakes and streams. 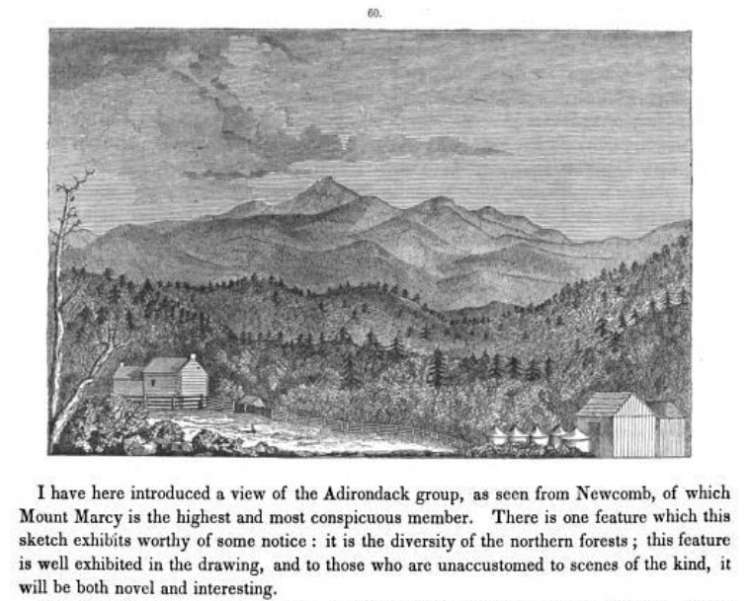 He gave an attractive description of Raquette Lake, which others ascribed to the region as a whole.

The view of the lake from [Indian Point] is also fine, and it is no exaggeration to represent it as equal to any in the northern highlands of New York. The waters are clear but generally ruffled with the breeze. It is well supplied with lake trout, which often weigh twenty pounds. The neighboring forests abound also in deer and other game. Hence it is finely fitted for the temporary residence of those who are troubled with ennui or who wish to escape for a time during the months of July and August from the cares of business or the heat and bustle of the city. To enable the traveler or invalid to make the most of the situation, a supply of light boats are always on hand for fishing and hunting, or for exploring the inlets and neighboring lakes which are connected with the Racket [sic].  10

Historian Philip Terrie places Emmons in the context of his times.

Emmons understood that America would follow western Europe down the path of industrialization, and he knew that the beauty and opportunities for spiritual renewal offered by the Adirondacks would be an invaluable treasure in a state where mills and smokestacks were even then beginning rapidly to replace forests and farms.  11

However, Emmons also promoted the economic exploitation of the natural resources within the Adirondacks. According to Terrie, Emmons had a vision of an “intensely populated and cultivated landscape” that embodied within one man the conflict between natural preservation and resource use, which still confounds us today. It is probable that the indomitable pioneer spirit of Matthew Beach and William Wood and early settlers of Long Lake and similar hamlets caused this vision to flourish as Emmons described.

We found that Indian Point was situated about midway in the lake between its southern and northern extremities and projecting far into it towards the northeast. It contains four or five hundred acres of excellent land, a warm, rich soil, as it appeared from the fine state of vegetables which were growing in the garden, and which were in an equal state of forwardness with the same vegetables growing on Lake Champlain.  12

Beach and Woods’s farm consisted of several acres of crops and hay pasture for up to ten cattle. But, theirs was a deceptively impressive subsistence farm. Though most Adirondack soils and the climate would not support expansive cultivation, their farm likely owed its success to two centuries of soil enrichment through burning and cultivating of root crops by Native Indians for their seasonal hunting parties.

Emmons’ experience on Indian Point affected his overall vision for the region. Fortunately for us, his connection to Indian Point did not alter the lake’s name. Had Emmons chosen to re-name the lake, we might know it today by the aboriginal name recorded in his report, Lake Fobullangamuck.