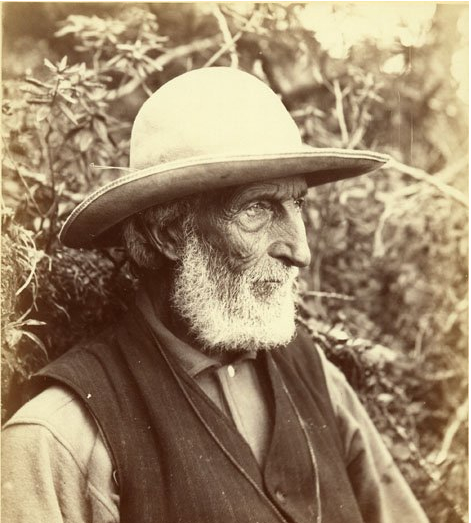 Alvah Dunning was perhaps the most famous of Raquette Lake guides, alleged to have helped lead the first excursion of sportsmen to Raquette Lake at age eleven. Born in Lake Piseco in 1816, he lived there until 1860 when his neighbors’ rightful condemnation of his abuse of his wife forced him to flee.  1  From that moment, he chose to remove himself from society in favor of the freedom of the wilderness. Yet civilization’s constant barrage upon him eventually brought him to a tragic end.

Reverend Thomas Wall described the man from his 1856 excursion to the region:

Dunning…is a very close imitation of some of [Fenimore] Cooper’s models [of the Leatherstocking Tales]– silent, stealthy in movement, full of resources; he could almost speak the language of the animals. I have seen him, by a peculiar chipper, call a mink from its hiding place in the rocks and shoot it, and have known him to bring a deer back into the water by bleating and making the noise of wading. Dunning was a true sportsman, never allowing more fish or game to be taken than was needed…Indeed, his excellence, when in his prime, was so generally known that it excited much of the enmity with which he was regarded by some, for if he could be had he was always first choice.  2

Dunning’s woodsman skills were learned from his father, “Scout” Dunning, who had served under General William Johnston and perfected his woodcraft during the French and Indian Wars and the American Revolution. These skills served Alvah well as he fled civilization for Lake Lewey and later settled in Blue Mountain Lake.  3

According to Dr. Arpad Gerster, the growing attraction of wealthy sports to Blue Mountain Lake soured the tranquility that Dunning sought.  4  My great-great-grandfather George Hornell Thacher began visiting Blue in 1862 seeking his own solitude and yet he represents the first wave that drove Alvah further west.   Ironically, GHT followed Alvah’s footsteps to the same spot 15 years later driven by the growth of tourist hotels on Blue.

Several sources state that Dunning lived at Indian Point on Raquette Lake between 1865 and 1868. My research indicates that he likely squatted in the first of two cabins built by William Wood, the one nearest the very tip of the southern fork of the peninsula. During this time, ownership of the cabin and a small parcel of land surrounding it changed between Albert Eldred and John Plumley, both of whom lived elsewhere. Plumley lived in Long Lake and being well acquainted with Alvah, it is conceivable that he allowed this use of his land by Dunning.  5

Of his many clients, we know that one visitor of note in the summer of 1865 was Fred Mather, who later became the fisheries editor of Forest and Stream magazine. For two weeks, he stayed with Dunning on Indian Point and fished for trout in Raquette and Brown’s Tract Inlet.  6

Mather later described him in his book My Angling Friends;

Only men who possess strongly marked personalities are capable of making strong friends and as equally strong enemies…it seems that Alvah is well liked by sportsmen whom he has served…Others dislike him, and among Adirondack guides he is, for some reason, the most unpopular man in the woods.

The enmity of other guides was also stoked by Dunning’s fierce belief in his right to unfettered use of the land and to kill game any time of year. Mather writes of visiting Dunning again in 1882 when Alvah complained;

Times is different now, an’ wus. In them days nobody said a word if a poor man wanted a little meat an’ killed it, but now they’re a-savin’ it until the dudes get time to come up here an’ kill it, an’ some of ’em leave a deer to rot in the woods, an’ on’y take the horns ef it’s a buck, or the tail ef it’s a doe, just so’s they can brag about it when they go home, an’ they’d put me in jail ef I killed a deer when I needed meat. I dunno what we’re a-comin’ to in this free country.  7

Although praised and sought after by the wealthy for his guiding skills, Dunning did not return the appreciation, complaining to Mather,

These woods is a-gittin’ too full o’ people fer comfort—that is, in summer time ; fer they don’t bother the trappin’ in the winter; but they’re a-runnin’ all over here in summer a-shootin’ an’a-fishin’, but they don’t kill much, nor catch many fish ; but they git in the way, an’ they ain’t got no business here disturbin’ the woods.  8

There is no small irony in the fact that the writings of Mather, in Forest and Stream, brought an even greater number of adventurers into the Adirondacks. Forest and Stream became a prominent voice championing the forest conservation and game regulations that infringed upon Dunning’s freedom.

Dunning continuously moved around the area. He allegedly purchased Osprey Island on Raquette Lake from John Plumley in 1868, sharing the island with Reverend Adirondack Murray to the early 1870s.  9 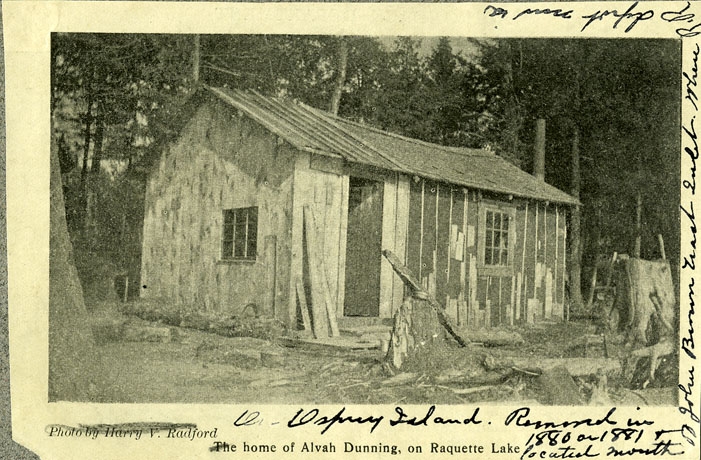 He then built a cabin at Brown’s Tract Inlet and later the one shown below on an island on Eighth Lake.

Mather attempted to remain in contact with Alvah as late as 1896 according to this classified placed in Forest and Stream.

While Mather and other writers in the popular press always expounded on Dunning’s expertise, they also often portrayed the man as a simpleton, condescendingly alluding to his lack of understanding that the earth is round, the reasons for tides, and giving Alvah’s voice a foolish dialect.

A popular fable about Dunning claims that he sold his vote for President Grover Cleveland in the fall of 1892 in exchange for two boxes of Cleveland Baking Powder. The true story is more complex but equally amusing. Dunning had guided for Cleveland in the summer of 1892. Prior to Cleveland’s second inauguration in March of 1893, the Fort Orange Club of Albany, NY, hosted a celebratory dinner for the president-elect. James Ten Eyck, President of the Club and owner of a rustic lodge at North Point on Raquette Lake, contacted Ike Kenwell to procure the freshest trout for the dinner. Kenwell, who had previously owned the Raquette Lake House at Tioga Point on Raquette Lake, contracted Alvah Dunning for the task.   Dunning caught 35 pounds of brook trout through the frozen ice of Shallow Lake. Rather than be paid for the trout, Alvah decided to make a trade. Erroneously believing the newly inaugurated President was associated with the Cleveland Baking Powder company, he wrote:

Dear Sir: Some time ago Ike Kenwell asked me to get you twenty-five pounds of brook trout. I done so. He offered to pay me, but I did not take any pay. Just now I am out of baking powder and would be very much obliged if you would send me some.

News of his exploits often made the press.   In the winter of 1894 came a report of his unfortunate death.   Forest and Stream magazine reported that Alvah had fallen on the ice of Raquette Lake and cracked his skull. He was brought to William S. Durant’s Camp Pine Knot where a doctor attending him said he would not recover. The magazine lamented “That such a man should, after long years of peril by field and flood, come to his death by a fall on the ice such as one might get on Broadway, is one of the ironical phases of fate.”  11  Fortunately for Alvah, the news of his demise was premature and he recovered to live another eight years.

His actual death was equally ironic. On the night of June 13, 1902, the 86 year old Alvah Dunning spent the night in a hotel in Utica, NY. Continuing their condescending tone, the press reported that Dunning died because he “blew out the light” on the gas lamp in his room and was asphyxiated by the gas.   A more accurate account is given in Forest and Stream magazine, which noted that the cock on the gas lamp was left one quarter open. It appears that Alvah had closed it enough so that the flame of the lamp died but that he did not seal the valve shut.  12

Modern civilization, which he had sought to escape all his life, tragically ended that life.