When I walk the land around Matthew Beach’s original hut and William Wood’s shanty, I imagine the Abenaki Indian guide Mitchell Sabattis pulling into their landings in a canoe or guideboat made by his own hand. Indian Point was a waypoint for many a traveler boating through the Central Adirondacks.

1890 Engraving of a photo of Sabattis by Seneca Ray Stoddard

While it is impossible to know how often Sabattis visited these acres, we have written record of at least 3 occasions: his trips with Joel Tyler Headley in 1844-46, accompanying C. W. Webber in 1849, and an expedition of women who explored the region in 1873 (beautifully told in Barbara McMartin’s book To the Lake of the Skies)

Sabattis guided for my great-great-grandfather George Hornell Thacher in 1862 as they explored the region from a base camp Sabattis had on Crane Point on Blue Mountain Lake. However, even if Thacher travelled to Raquette Lake as early as 1862, it is unlikely that he spent a night on Indian Point.  Sabattis maintained a campsite from 1852 to 1877 on Watch Point according to Ken Hawks, who now owns the property.

A member of the St. Francis tribe of Abenaki Indians, Mitchell Sabattis was born in Parishville, St. Lawrence County in 1823. He began to accompany his father Captain Peter Sabattis on hunting expeditions at the age of seven.  At eleven, he was one of the earliest settlers in Long Lake, moving there with his father in the early 1830’s. Over a life of 83 years, he and his wife Elizabeth raised five sons and a daughter. He was a founding member of the Wesleyan Methodist Church of Long Lake. In 1865, he raised funds to build the church where he frequently played the violin, sang and preached.  When not working as a guide he tended to a 20-acre farm on his 160-acre homestead. 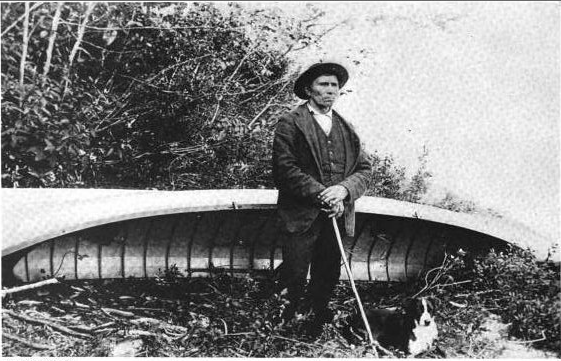 Image of Sabattis on Long Lake near Sagamore Hotel in 1886 – History of the Adirondacks. A. Donaldson. 1921.

Much has been written about Sabattis as the legendary Adirondack Guide, but I am intrigued by his abilities as a boat builder. The historian Alfred Donaldson claimed that Sabattis created the first guide boat around 1849.   Subsequent historians have debated different people as the originator of the idea for the guideboat’s design. Nonetheless, Hallie Bond says in Boats and Boating in the Adirondacks, “The guideboat did not spring full-blown from the forehead of Mitchell Sabattis, or anyone else for that matter, but Sabattis, living in the center of early guideboat development, may well have had a hand in its evolution.”

The earliest tale of Sabattis describes his skill in building another type of boat – a spruce bark canoe like the one shown here.

In 1843, John MacMullen and his friend Jim R. were rescued along the Raquette River by Mitchell Sabattis, who was travelling with two men (one is presumed to have been his father Peter), two women and a baby.   For one day all eight crammed into Sabattis’ birch bark canoe, which barely stayed afloat with the water only three inches below the gunwales. Upon reaching a cabin on the shores of Tupper Lake, Sabattis decided to construct a spruce bark canoe to carry four of the men. MacMullen described the process in The Evening Post of New York in 1880:

This kind of craft is made of a single piece of bark while a birch canoe is made of many pieces fastened together. The process of making our canoe was very interesting. A fine large spruce tree about a foot and a half in diameter was chosen that grew in an open space near the river and had fifteen feet of good thick bark without break or knot-hole. The tree was cut down, [they] relieved one another in the work, a ring was cut through the bark along the trunk. ‘Spuds’ were made, and the whole clear sheet of bark, fifteen feet long and four feet wide, was laid upon the ground with the inner side down.

[Captain Peter Sabattis] then cut away a slender triangular piece of the thick outer bark, about six inches at the base and about three feet from each end, leaving the flexible inner bark to fold over so that when the corners were brought together and the ends closed up the bow and stern might both be somewhat higher out of the water, and the sides need not sag out so much in the middle.

The ends of our boat were sewed up with the roots of the spruce tree. These slender roots or rootlets can be had of six feet in length and running from a quarter of an inch down to a point. The smaller part is taken to use as thread. A hole is made in the bark with a sharp stick and the rootlet thus inserted… The spruce gum is used to make the inside of the seam water-tight. Thus this tree supplied for our boat bark, thread and gum…

Long, narrow pieces of cedar… fifteen feet long by two inches wide, and only three quarters of an inch thick, [were] split almost as smoothly as if they had been sawed. These pieces were used as gunwales and tied on with strips of tough and flexible bark passed through punched holes. Strips of wood thin enough to bend were cut just of the proper length and then forced in so that they followed the curve of the boat, their strong crosspieces also ran athwart between the gunwales to stiffen the craft…This ‘naval construction’ took the best part of two days.”

Discussing the origins of the Adirondack guideboat, John Duquette wrote in the Adirondack Daily Enterprise: “To avoid the solid weight of a skiff or dory, it was necessary to experiment with a skeletal frame sheathed with light but strong material. The frame consisted of a bottom board with ribs that were bent or steamed to fit an outer shell. Ribs that were bent had a tendency to warp which resulted in a distortion of the hull. An alert Adirondacker noticed that an uprooted spruce tree disclosed a natural crook where the root grew out from the base of the tree. Here was a strong resilient piece of wood in a shape that required no bending.”

While a spruce bark canoe does not use solid pieces of spruce root wood for ribbing, Sabattis would have been keenly aware of this unique attribute of the spruce tree’s roots. He is as likely a candidate as any other to be the one who contributed this innovation to the design of the Adirondack guideboat.

(watch a video of the recent construction of a spruce bark canoe https://www.youtube.com/watch?v=u6V-v7mVymo )