In my last piece regarding when the mysterious Thacher Cabin was built, I cited numerous newspaper articles and books that referenced the cabin’s existence.   However, none of them clarified where the cabin was built. Previously reviewed maps of Raquette Lake gave no indication and no photos or drawings of the cabin have been found.

I chose to begin my search by focusing on the one visitor to the cabin for whom historical records might exist.   In Aber and King’s History of Hamilton County, it is written that the priest Rev. Henry Gabriels performed Catholic Mass at the Thacher Camp from July 11th to the 14th in 1878. Gabriels later became the Bishop of Ogdensburg. In the hope that this early mass in the Adirondacks might be of historical significance, I contacted the archivist of the Diocese of Ogdensburg looking for any original documents or photos of Gabriels’ visit.

Imagine my surprise when the archivist sent me the following photocopy from notes that he found:

“North Point Inn”? Could I be wrong in my assumption that the 1878 cabin was built on our family’s land on Indian Point? The North Point Inn was located across North Bay from Indian Point. My mind raced as I retraced my steps looking at all of the newspaper articles and books.

One New York Times article had said “There’s ex-Mayor Thatcher of Albany’s place,’ said the Captain of the little steamer, pointing to a fine lodge on the north shore.”   Did he mean the north shore of Raquette Lake and not the north side of Indian Point?

I then realized that when Nessmuk wrote of visiting the cabin, he simply wrote “a gentleman by the name of Thatcher (sic) who has a fine residence on Raquette Lake.” No mention of Indian Point whatsoever, just my assumption.

Fortunately, my heart rate eventually was calmed, after a day of frantic research turned up this from Seneca Ray Stoddard’s 1880 edition of The Adirondacks Illustrated: 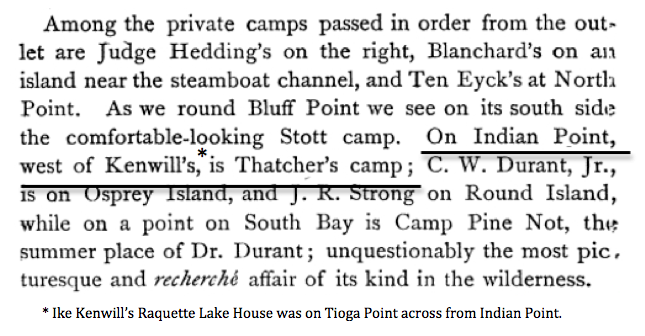 Once again confident of the cabin’s existence on Indian Point, I now tried to discover where on the land it was situated. I began by reviewing the property deeds. In 1876, John Boyd Thacher purchased two parcels on the tips of Indian Point. He paid nine dollars an acre to Marshal Shedd for roughly 25 acres. This first parcel is all the land to the east of the yellow line shown below, except for the area to the east of the blue lines.   JBT paid twenty-two dollars per acre to a William W. Hill for this second parcel of only 4.5 acres.

Eureka! Why would JBT pay more than twice per acre for the second parcel? Could it be that it contained an existing cabin? Was this the location of what became known as the Thacher Camp?

Alas, let me just say that there exists another explanation as to why JBT paid a high price for the second parcel. As the deed indicated that William W. Hill was from Albany, I thought it best to see if there was any connection between Hill and the Thacher family. Perhaps a higher price was paid as a favor to a friend.

Indeed, I found that William W. Hill and John Boyd Thacher were 33 degree Freemasons and both members of the Albany Chapter of the Rose Croix.   William W. Hill was an amateur entomologist whose collection of over 10,000 specimens of butterflies and moths was donated to the New York State Museum. Hill was also an officer of the Albany Institute. JBT had much in common with Hill’s scientific and preservationist inclinations and I have no doubt in claiming them to be more than mere acquaintances.

This explanation does not completely eliminate the possibility that there was an existing cabin within Hill’s parcel.   However, an epiphany came to me that argues against George Hornell Thacher establishing his camp on the southern shore of Indian Point.

No fewer than five newspaper articles and Nessmuk’s book speak of George Hornell Thacher’s love of lake trout fishing. Anyone who knows Raquette Lake understands that in summer, one fishes for lake trout exclusively in North Bay, where the depth provides the cold water desired by the trout. It is logical that GHT would have built his cabin along the north shore of Indian Point.

Indeed, a fish tale would prove to be the conclusive clue. On July 10, 1879, the Weekly Saratogian published:

So clearly the Thacher Cabin was somewhere along the north side of Indian Point, but where?

Early in my research, the Adirondack Museum Librarian Jerry Pepper had shown me a hand-drawn map of Raquette Lake.  The museum did not know who created the map or when it was created. 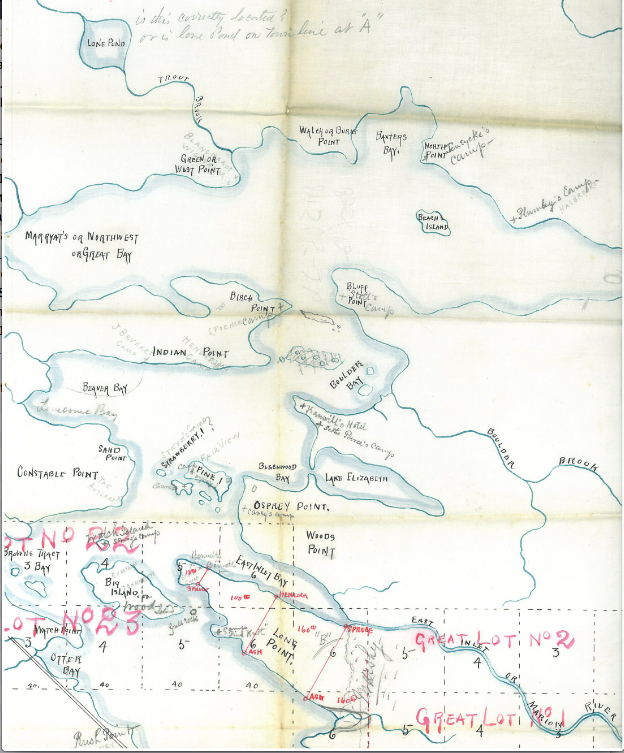 The map has an X marked next to the word “Camp”, written in cursive, on the end of Birch Point.

As this is the location of our family’s little, red one room cabin built in 1910, I assumed at first that this map was from the early nineteen teens.   However, further analysis revealed a different conclusion.

In addition to the geographic locations marked in ink, the map has the names of various camps written in pencil along the shore. There are two distinct sets of handwritten notations, one in cursive and one in block letters.   Based on the time period in which each of the named landmarks existed, the cursive notations predate those in block letters. The comparison of the dates reveals that the notation for the “Camp” on Birch Point reflects the year 1881 or 1882.

It would appear that the first Thacher Cabin was built in 1878 very near if not actually on the same ground where our little red cabin still stands today. What I would give for any photos that show the tip of Birch Point, even in the background, taken between 1878 and 1885.