My cousin Stephen Fitzpatrick showed me a mark that is chiseled into a rock just outside the front door of our family’s little red one-room cabin on Indian Point. 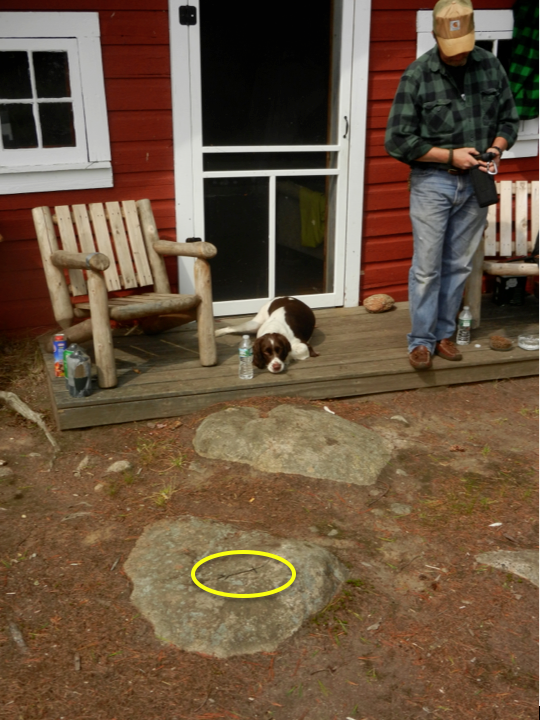 The mark vaguely appears like an arrow but with a crosshair at the top instead of a point. Stephen applied an ink dye to the mark so it is more visible in this photo. 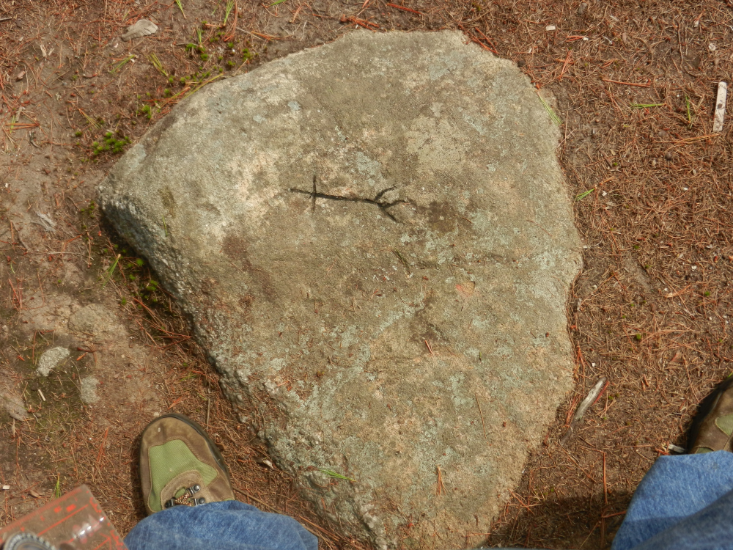 Stephen remembers asking his mother about the mark, and she said that her father claimed it was there when he first came to the Point in 1910.

The mark itself is intriguing, but the mystery deepened when Stephen explained that the crosshair is actually a compass rose.   The large line runs almost perfectly north-south, and the smaller line is nearly east-west.

Curiosity piqued, I firmly slapped on my amateur sleuth’s cap.

I sent the photograph of the mark to Jim Vianna of the Colvin Crew to determine if it might be a surveyor’s mark. The Colvin Crew is a group of 140 surveyors dedicated to preserving the memory of Verplanck Colvin and rediscovering the exact locations of Colvin’s landmarks throughout the Park.   Jim dashed any thought of its being the work of a surveyor, suggesting that it simply was the result of someone with lots of time on their hands during a lazy summer day.

This led me to ask Warren Reynolds if he might have been the engraver. He had lived in the little red cabin over seventy years ago, when he was eight years old. He said neither he nor his family created the mark.

I consulted with John Fadden of the Six Nations Indian Museum to see if the symbol meant anything within the Iroquois culture. John did not recognize the mark as being the work of Native Americans.

When I say that the crosshair is a compass rose, it is important to note that it does not reflect true north; rather it is close to magnetic north. The difference between magnetic north and true north is called declination, and the position of magnetic north has changed over time.  Could the declination lead me to when the mark was made?

Today, the declination at Raquette Lake is 13° 34‘ west of true north.   A careful review of the photo that I had taken showed that the mark has a bearing of 5° west of magnetic north.   If we assume an uncertainty of one degree either side of this bearing, we could estimate that the mark was made at a time when magnetic declination was between 7° 34’ and 9° 34’.

I consulted a table of magnetic declination data from 1750 to 2010 for the latitude and longitude of Raquette Lake. It would appear that the mark was chiseled between approximately 1850 and 1880. Perhaps it is the work of Beach and Wood or the Thachers around the time of constructing their first cabin.   Or so I thought.

Given that my wife is an astrophysicist and a big stickler for scientific accuracy, this past weekend I went back and did more careful measurements of the bearing while keeping the compass elevated and level above the mark, rather than lying on the mark which is an uneven surface.   The bearing appears to be either dead on or less than one degree away from current magnetic north.  Not the 5° that my earlier photo showed.

Prior to my grandfather’s use of the cabin starting in 1910, the last time the declination was within one degree of its current value was between 1600-1620. Could it be that the mark was made by the earliest of French Jesuit explorers of the region?

What a fantastic discovery! Or should I say “fantastical”, as in fantasy.   With my compass in hand, I made another discovery. I measured the bearings of the red one-room cabin’s walls. They too were aligned almost exactly north-south and east-west with today’s magnetic north.   We know the cabin was not built recently, nor was it built between 1600-1620.

I think my wife is correct when she says the conclusion is that 1) we have no idea of the accuracy of the magnetic compass that was used by the person who created this mark and 2) there is limited accuracy in the compass that I have been using to measure the bearing, thus leading to the conclusion that we can safely say the mark was made between 1600 and 2014.

If we were paleontologists, we would be raising a glass to toast right now. In this case, it goes to show that an armchair historian can get himself in a lot of trouble when he plays armchair scientist.

Of course, please do let me know if you recognize this mark.