“Thunk-Ping” “Thunk-Ping” echoed through the woods as the head of the sledge came down upon the maul.  Rhythmically the forged steel struck the maul, driving the blade into the round section of the old oak deadfall’s trunk.  My hands tried valiantly to not retreat, but hold fast to the maul handle as my father sent the sledge’s head crashing down.

Each summer we would split a deadfall and stack the wood in our shed for future fires in the Vermont Castings stove.  Beautiful sunlight barely broke through the thick canopy of white pine and spruce as we sweated within a few hundred feet of our cabin.   The sledge hit the maul over and over, sounding like the chimes of a slow clock that strikes its bell every ten seconds.

Father saw me staring at my watch as if to time the blows.  A few more sections were split and yet I still stared at my watch.  “Do you have some place you would rather be?” he asked.  “No, no…just thinking of a swim when we’re done.”   A simple white lie, as patiently my anticipation grew.

“Are you expecting someone?” he asked, just as I heard the sound.  The drone of an engine–high above us—supplanted the whine of mosquitoes flying around our heads.  The tone of the prop lowered in pitch, as the speed slowed and the wings lost their loft.   “Come on Dad–let’s go!”

He looked at me with gleeful surprise, a child on Christmas morn completely shocked and giddy.  We reached the dock just as the seaplane touched the waters of North Bay.  “The workhorse of the skies” came to rest with a pontoon rubbing the far end of the dock and the wings just barely clearing the dock poles.  I grabbed the wing’s strut and held her to the dock while the prop continued to turn.

The cockpit door swung open and the pilot stepped down to the pontoon and ushered us aboard.  I saw a face weathered with the creases of time and tanned like the leather of an old baseball glove.  A tuft of white hair and an aged body belied the strength still possessed.  I sat in back and watched the buttons, knobs and dials as my father moved into the seat aside the pilot.

The prop re-engaged and pulled the plane away from the dock.  Slowly we built speed as we bumped along the waves.   The drone of the engine rose higher in pitch as we gained momentum and moments before we lifted, the pilot leaned over to my dad: “Thacher, eh…  Any relation to Judge Thacher?”   “He was my uncle,” said my father.     As the pontoons broke their bond with the water and the plane angled steeply up, the old pilot replied, “I guided for your uncle back in 1929.”

Eighty-two-year-old Buster Bird was at the controls of our maiden voyage in an Adirondack seaplane.    As we floated above the lakes and gazed at the mountaintops, Buster regaled my father:  “Your uncle and your father would stay at the cabin enjoying their spirits while I went off to fish or hunt.  We would take pictures of the two of them surrounded by their catch to keep the women folk back home none the wiser.”   Dad recounted, “The Judge, while Mayor of Albany, broke the arm of a patron at the Fort Orange Club, and escaped up here to hole up while the storm blew over.”   The two delighted in their memories.

From the cover of Changing Times in the Adirondacks – 1

Later that day we pulled our boat up at Bird’s Marina for gas.  My father could not stop talking about our flight and lit upon our pilot’s great nephew, Joe Bird.  “It was as if Buster knew every tree in the forest,” crowed Dad.   Without missing a beat Joe retorted, “Hell, he ought to.  He hit most of them.”

Flying with Buster Bird–over two decades ago–began my fascination with our family’s history on Raquette Lake.   I recently began a search to discover the age of our family’s little red, one-room cabin.  In subsequent postings, I will unravel the clues unearthed and reveal new mysteries discovered on these fifty acres of Beach and Wood. 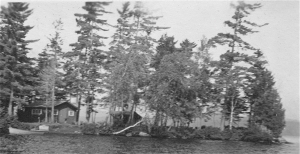 the earliest known photo of the cabin — 2 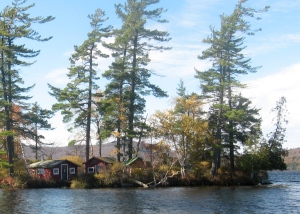 the cabin as it looks today

3 thoughts on “Bird of Flight”