I know where Matthew Beach and William Wood built their original cabin (depicted in this 1840 sketch by John Hill) on Indian Point. Or at least I think I know, or perhaps I should say I have deduced a pretty darn good educated guess. I welcome other’s critiques of my assumptions. 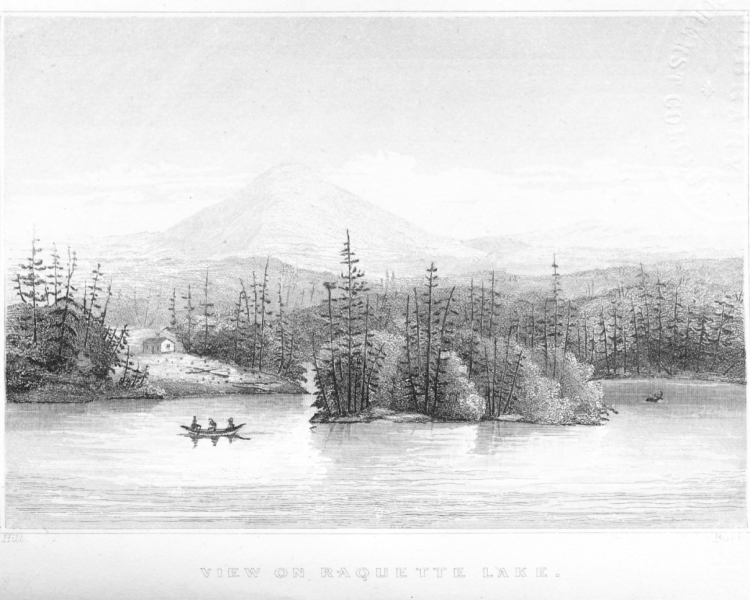 After discovering the location of the mysterious 1878 Thacher cabin, my obsession turned to searching for the first settlers’ home on our land. The above sketch offers little in the way of accurate perception of distances given that the opposite side of North Bay appears as close to Needle Island as the tip of Indian Point. And don’t get me started on the apparent thickness of Needle Island. Yet the drawing holds some surprisingly valuable clues.

One might even question if this could possibly be a view of Needle Island and Indian Point. Thankfully, there exists exactly one more piece of contemporary evidence on the cabin’s location. A portion of the 1860 map of the Headwaters of the Racket River by F.A. Merritt shows the cabin on the north fork of Indian Point. Here again, the proportions do not reflect reality and the exact location of the cabin cannot be determined from the map. 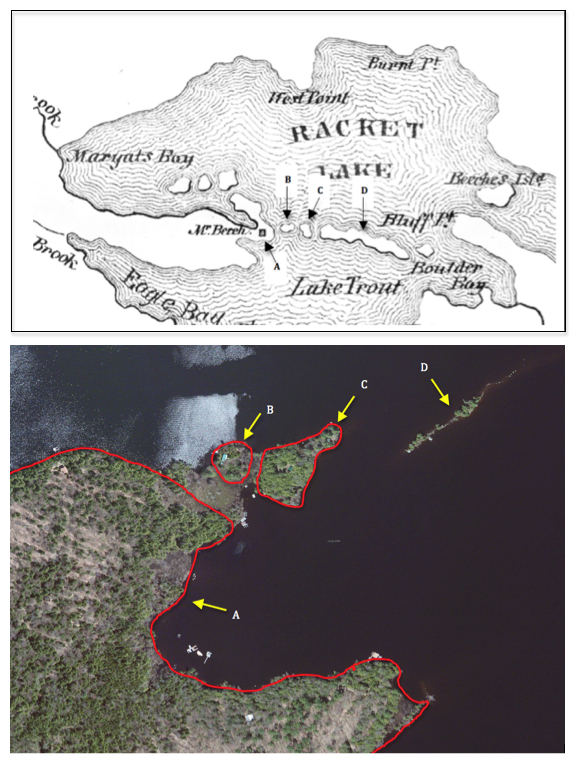 Although the sizes of the islands appear gigantic, my interpretation is that the very tip of the north fork appeared to the mapmaker as two small islands (B & C). If surveyed in early spring with unusually high water, what is today swampland separating A from B and B from C, could have been an open channel of water. This would imply that the cabin was located within the broad area marked A.

Having consulted the two pieces of evidence that provide graphic clues to the cabin’s location, I turned to the pitifully few cabin descriptions written by Beach and Wood’s visitors.

During his 1851 visit, James McEntee wrote:

We heard three or four rifle shots in the direction of Beach’s, and rowing over there we found a skiff and a birch bark canoe and me Beach and an Indian at the landing. Beach told us that a party had arrived and probably the one Brainerd was expecting…I had quite a curiosity to see him, and walking up to Beach’s house we found the party there.

The words “walking up to Beach’s house” appear to correspond with the 1840 drawing’s perspective that the cabin was on a slight rise of land above the lakeshore. The description also implies that McEntee could not hear or see the party at the cabin from the shore.

C. W. Webber wrote of his 1849 visit: “Securing our boat, and taking out our equipment, we walked to the hut, but a few rods from the edge of the lake”.   A rod is 16.5 feet, but the meaning of “but a few” could be interpreted to mean as little as two to perhaps five rods. This would imply that the cabin could have been between 33 and 82 feet of the shore. Given McEntee’s words, I suspect the cabin was at the higher end of this range.

An enticing yet cryptic clue comes from David Read’s 1848 letter published in Joel Tyler Headley’s The Adirondack or Life in the Woods.

About five hundred yards from Beach’s hut, stands a lofty pine tree, on which a grey eagle has built its nest annually during the nine years he has lived on the shores of the Raquette….From his cabin door he can see them in sunshine and storm.

If only Read had described where this lofty pine tree itself was located.

These writings did not help to zero in on the cabin’s location, so modern science was needed to aid the search. Dr. Mike Kudish, professor emeritus of forestry science from Paul Smith’s College suggested that the cabin and cropland clearing would likely today be a stand of spruce and white pine, secondary species that would have naturally reforested the open clearing.

Using an aerial photo from the early spring and Google Earth, I determined the GPS coordinates of the corners of two search areas (orange and red) mostly devoid of deciduous trees. The yellow line is the western boundary of Matthew Beach’s property.

Of course an aerial photo does not reveal what the reality is on the ground. Walking the two search areas with professional GPS equipment, I mapped the areas in blue that are wetlands and the red and orange areas which were the only ground suitable for the cabin’s location. 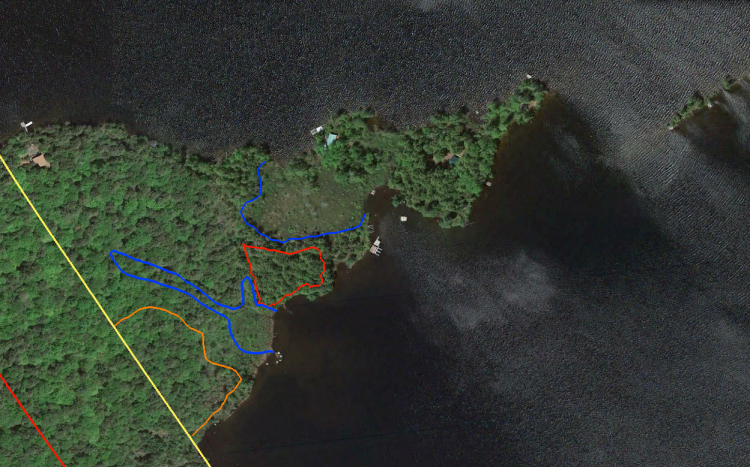 I searched the ground of both sites extensively but found nothing that indicated the remains of a cabin. The cabin had been described by C. W. Webber in 1849 as “of such peculiar and original construction that few would imagine it, at first sight, a human habitation…scarcely anything more that a hunter’s bark shanty of large size…and the roof was formed of as many as three different thicknesses of spruce bark, beside there being a rough flooring to the ‘building’, if indeed, I may use this term.”

Lacking a foundation or even stone pilings at its corners, it is not surprising that all surface evidence of the cabin has rotted away in the intervening 135 years since it was last occupied.

With the help of the Adirondack Research Consortium, I contacted Dr. Christopher Wolff of the SUNY Plattsburgh Anthropology Department. Dr. Wolff and two graduate assistants spent two days digging ten shovel test pits in each of the search areas.

Alas, we found no evidence of the cabin’s location. In fact we found no man-made artifacts whatsoever. We did however discover that there is a burn layer in the ground about 8 to 12 inches below the surface (the grey ash in the photo). Dr. Wolff said it either indicates slash and burn cultivation at the hands of Beach and Wood or Native Americans, or a forest fire long ago. The burn layer is present throughout the north fork of Indian Point and thus does not provide any clue to the cabin’s location. 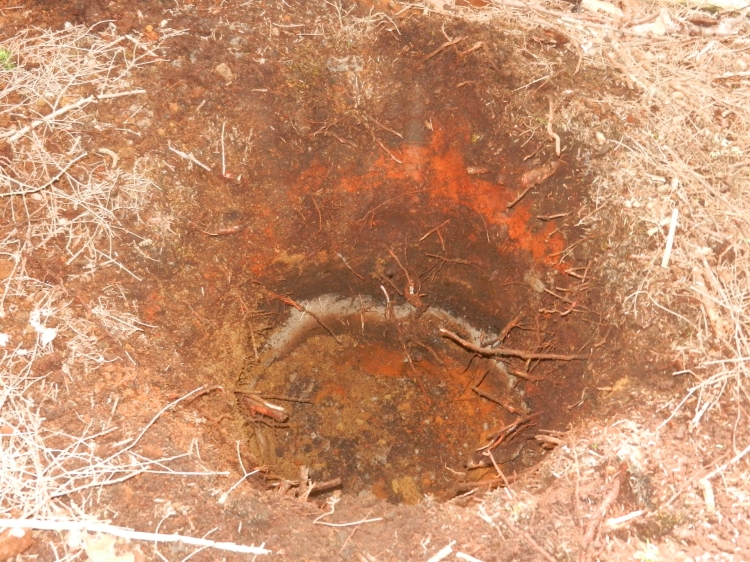 The Empire State Metal Detector Association based near Albany also aided the search.   Tim Myers and Peter Teal travelled up to Indian Point for two days of detecting. 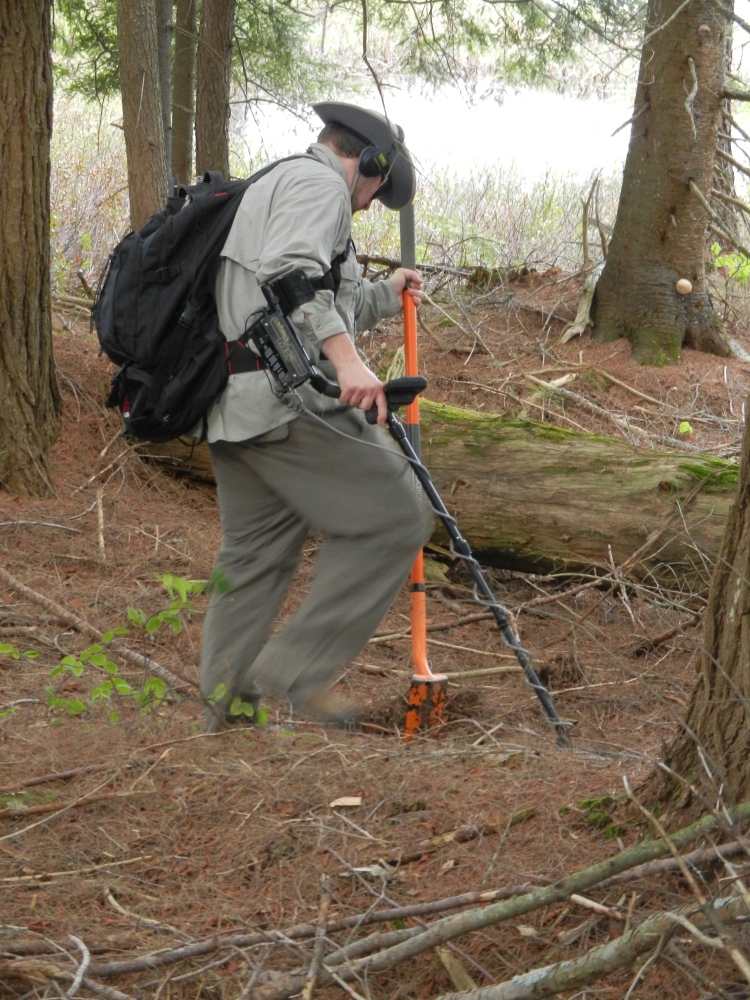 Once again the search proved elusive. No artifacts were found in the red search area and the further west orange search area revealed only the lead bullet shown below which was fired from a .32 Smith & Wesson Number 2 Army Revolver (manufactured between 1861-1874) and a piece of iron from a chain link. Both of which post date the time of Beach and Wood. 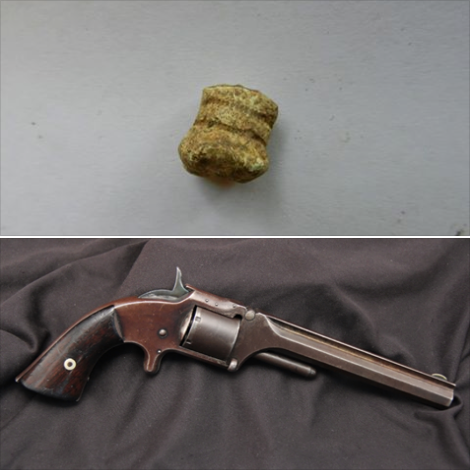 Meyers and Teal were very surprised to find so little in an area occupied from 1837-1870; however, Meyers commented that they have done detecting at sites clearly marked as homesteads on old maps and come up similarly empty-handed. Both men believe that the orange search area is much more suitable for the cabin site, given that the red search area is bordered on two sides by wetlands and susceptible to flooding.

The mystery would have remained unsolved if not for the following letter, written by Ms. Howell to Amanda Benedict during the 1873 women’s botany expedition chronicled in Barbara McMartin’s book To the Lake of the Skies.

The accompanying sketch is a view from our camp [on Indian Point] which we were looking upon when at supper…The little boat near the island [Needle Island] which is one of our own is trying to approach the splendid buck, which is swimming with all its might toward the west and will evidently reach land before the boat overtakes it. Near the boat on the end of the island is the Eagle’s nest which for many years was the home of a family of Osprey.

Alone this text offers no meaningful insight, but it is the next paragraph of the letter that enlightens. Ms. Howell’s letter proceeds with a verbatim plagiarizing of two whole paragraphs of David Read’s 1848 letter in which he speaks of the “lofty pine tree” 500 yards from Beach’s hut. We do not know if Ms. Howell included these words in her original letter or if Benedict placed them there when transcribing all of the expedition letters. However, I think it is clear that the writer is implying that the Eagle’s nest on the west end of Needle Island in 1873 is one and the same as that seen by David Read in 1849.

This is very plausible as John Plumley and Amos Hough, as close as family to Matthew Beach, were among the guides with the women’s expedition camping on Indian Point. They would have known and could have told Ms. Howell and Amanda Benedict of the lofty pine and eagle’s nest’s history. It is also likely that Amanda Benedict would have read and indeed might have had with her on the trip her uncle Joel Tyler Headley’s book in which David Read’s letter was published.

A closer study of the 1840 sketch of Beach and Wood’s cabin reveals corroborating evidence of this theory.   If you look closely, the second pine tree in from the west end of Needle Island is topped with a horizontal surface rather than coming to a point. No other tree in the drawing has a similar top. Could the artist have been attempting to indicate an eagle’s nest?

A similarly close look at the drawing of the cabin clearly shows a hill rising behind and above the cabin with a few trees on it. 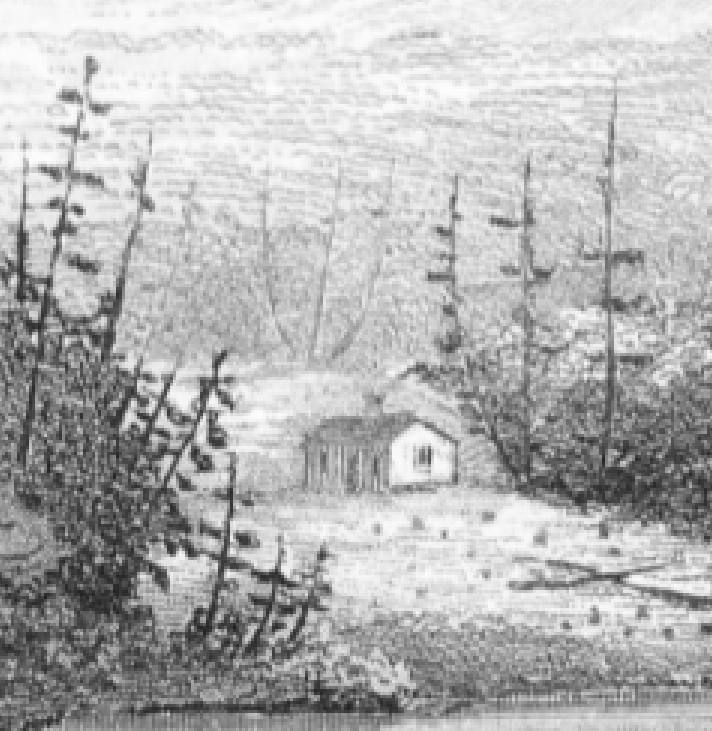 I believe this hill to be the small rise indicated by the arrow in the topographical map below.

Putting together all of these clues, I theorize that the cabin was located at least 500 yards away from the west end of Needle Island, that the island was visible from the vantage point of the cabin, and the area northwest of the cabin had a higher elevation.

I am convinced that the original cabin must have existed in that portion of the orange search area south of the light blue sight line from Needle Island. I welcome any suggestions for how to search for definitive evidence in this area. However, even if I never find a holy grail of an artifact, I am content with my current conclusion, and my obsession has been sated.

4 thoughts on “The Search for Raquette Lake’s First Cabin”