And how solemn it is to move all day through a majestic colonnade of trees and feel that you are in a boundless cathedral whose organ notes swell and die away with the passing wind like some grand requiem. Still more exciting is it to lie at midnight by your camp fire and watch the moon sailing up amid the trees or listen to the cry of the loon, wild and lonely, on the wild and lonely lake, or the hoot of the owl in the deep recesses of the forest.” 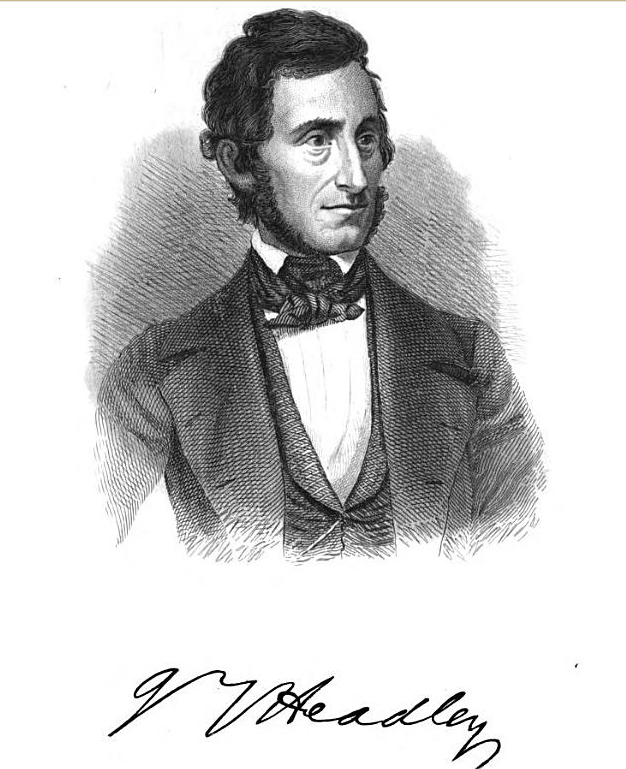 Many of you have probably heard of “Adirondack Murray”. The Reverend William H. H. Murray wrote Adventures in the Wilderness in 1869. His book was credited with driving throngs of tourists to escape the cities for the Adirondacks in the latter quarter of the 19th Century. However, it was Joel Tyler Headley two decades earlier who wrote the seminal book The Adirondack or Life in the Woods (click title to read full online edition) in 1849 that brought the first wave of wealthy sports to explore the region.

Between 1844 and 1846, Headley spent his summer months exploring the region guided by the famous Abenaki Indian guide Mitchell Sabattis.  His travels included visiting the home of Matthew Beach and William Wood on Indian Point.

Today Raquette Lake’s year-round residents are filled with intertwining families with generations of settlement in the area: the Dillons, the Paynes, the Lamphears, the Burkes, and the Birds.   While their family connections are vital to the vibrant community today, it was also family connections that influenced the exploration of the area to begin with.

Joel Tyler Headley was an older first cousin of Farrand Benedict. Undoubtedly, his tales of travelling through the region had an impact on Benedict’s plans to invest in and develop the Raquette Lake region. Benedict purchased all of Township 40 in 1848, likely after hearing Headley’s personal tales but prior to the publication of his book. Would this count as 19th century insider trading?

Headley was born in 1814 in Walton, NY, and followed his Presbyterian minister father into the church, graduating from Union College in 1839 and Auburn Seminary in 1841. Upon completing his studies he declined a pulpit in New York City due to struggles with mental illness. Instead he took charge of a small Congregational Church in Stockbridge, MA. After two and a half years in the pulpit, he suffered a mental collapse and travelled to Europe to convalesce. He began to write of his trips in Europe, and upon returning to America he published the stories as letters in prominent newspapers. He became a well-known author and was elected New York Secretary of State in 1855. His travels to the North Country were in response to ongoing mental suffering as he noted that “without frequent communion with nature every man degenerates.”

According to historian Philip G. Terrie, The Adirondack or Life in the Woods “illustrates a significant stage in the development of American attitudes toward wilderness. Headley’s admiration of wild scenery, his sense that in the wilderness he was closer to God, his hearty enthusiasm for day to day life in the woods with all its challenges, and his conviction that intimacy with the wilderness made him a better man – these are all key elements in the modern appreciation of wilderness.”

Terrie notes that numerous, expanded editions of the book were published over a period of three decades. The author Paul Jamieson considers the book “among the first six titles a collector should choose for the nucleus of an Adirondack library.”

I firmly believe that Headley influenced George Hornell Thacher Sr. to travel to the Adirondacks in 1862, where Mitchell Sabattis also served as Thacher’s guide. Whether it was simply the impact of his book or a more personal connection is unknown. However, the circumstantial evidence is intriguing: both men were members of a total student body of 400 at Union College in 1839; both attended Presbyterian seminaries, Auburn and Princeton, respectively; both served for a short time as ministers; and both left the ministry and entered New York State politics in Albany.  While they might have been acquainted, I doubt that they were friends given their opposing political philosophies.  Headley was a member of the American Party (The Know Nothings) and espoused virulent anti-immigrant and racist views.  Thacher was part of a Democratic Party which was not anti-immigrant and, although not abolitionist, sought political compromise between slave states and non-slave states.  Despite abolitionists holding views which he did not support, Thacher once took a prominent stand to support their right to hold a convention in Albany, NY.

In 1861, the Abolitionists Susan B. Anthony and Frederick Douglass headlined a speaking tour that visited major Northeast cities. Violent mobs appeared at each venue causing major disruptions. When they arrived in Albany, Mayor Thacher escorted the speakers to the conference. He informed the public that he had placed plain-clothed police officers throughout the hall, and he personally sat on the stage with a revolver in his lap for the entirety of the daylong conference.

Despite the significant impact which Headley’s book had upon the Adirondacks, it was but one of over twenty history books and numerous articles produced by the writer.  He penned Napoleon and His Marshalls, Washington and His Generals, Life of Oliver Cromwell, The Sacred Mountains, Sacred Scenes and Characters, Sketches and Rambles, The Old Guard of Napoleon, Life of Andrew Jackson, History of the Second War with England, Life of George Washington, The Chaplains and Clergy of the Revolution, History of the Rebellion, The Great Riots of New York, Grant and Sherman, and Life of Grant, among others.

“As an historian or a romancer, Mr. Headley certainly has no equal, and he has seldom or never had a superior. Mr. Headley is one of the most promising of the youthful writers of this country.” – John S. Taylor

High praise, and at the time Headley was considered a peer of Ralph Waldo Emerson and Henry David Thoreau.   Why is it that he is not among the authors that we learn about today in school?

Perhaps it is because the quote above comes from his publisher. Taylor also said, “[The critics] are still debating the question whether Mr. Headley shall rank with the first writers, or above them; while with the people that question long since is decided.” While his writing was attacked by no less than Edgar Allen Poe, who called him “the autocrat of all quacks,” the masses purchased over 200,000 of his books during his lifetime.  One reviewer commented that “it was far pleasanter to read the entertaining and dramatic pages of Headley, with their impassioned, stirring pictures of war and heroism, than the tame, tedious biographies [of professional historians].

An opposing view was expressed by the critic Rufus W. Griswold who said, “He has taken up the subject with ardor, but with little previous preparation; the work therefore indicates imperfect information, immature views of character, and unconsidered opinions.  The style has the same melodramatic exaggeration which the whole design of the work exhibits.”   Headley is largely forgotten because he was a sensationalist in addition to holding political views which are abhorrent.

His obituary in 1897 belies his diminished reputation. “In the death of Joel Tyler Headley, the country loses one of its most popular, if not one of its most distinguished historians. He was a popular historian rather than an accurate one. He was a prolific writer. The style was somewhat sophomorical (sic), but it pleased his readers.”

While I do strive to be accurate, I would be pleased with a similar epitaph.