You see me here standing where my great-great grandfather George Hornell Thacher Sr. once stood on the porch of the family lodge built in 1867 on Thacher Island on Blue Mountain Lake.   The photo is not dated but given his aged appearance (no, the guy on the left), I believe it to be from the early 1880s.

My father spoke of visiting his uncle on the island as a young boy in the 1940s.   No Thacher has had the opportunity to walk the island since then. It had always been a dream of mine to visit my family’s first summer home. A dream fulfilled thanks to the hospitality of John and Janet O’Loughlin, whose family has owned the island for over two decades.

I am extremely grateful to John who, after discovering my writing, sought me out and extended an invitation for my family and me to visit their island.

The island holds a special place in the hearts of the O’Loughlins and their extended family.   Janet and her brother spent many childhood summers lodging at Potter’s.   She often visited the Anderson family, who owned the island at that time. She and her brother always fought over just which one of them would one day buy the island and make it theirs. In the end, it was Janet’s beloved, late brother who made the island part of their legacy.

Their family has lovingly restored and expanded the lodge.   The original walls of the 1867 lodge still remain within newly finished interior and exterior walls, noticeable by the almost one-foot-thick door jambs. Just as the original cabin remains, albeit hidden, on the island, I wondered what other traces of my family remained on Thacher Island.

When I researched my family’s time on the island, I came across this interesting 1920 postcard showing a wooden plaque affixed to a tree. 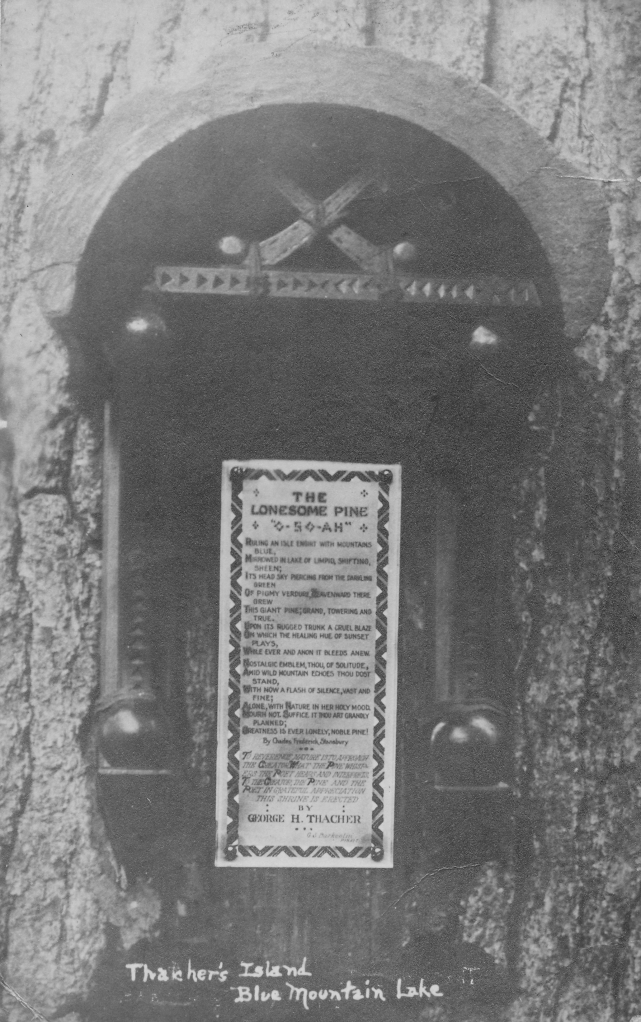 Was this still there?

The postcard intrigued me because the lettering is too small to discern anything other than “The Lonesome Pine”. I assumed the meaning would be lost to posterity until I made a find in my cousin’s family photo album.

In this photo, four of the five Thacher brothers are seen erecting the shrine in September of 1919. My grandfather Kenelm is at left, GHT 3rd is hammering, and Edwin (whom some of you may know as Ebby T.) and Thomas are crouching on the right.

Another photo shows a close-up of the text of the shrine.

It is the poem “The Lonesome Pine”, written by Charles Frederick Stansbury.   The words of the poem evoke a tall pine tree on the island that towers over all the others.

In this 1870s photo of the island by Seneca Ray Stoddard, one pine tree eclipses its neighbors by more than thirty feet, located about one hundred feet behind the lodge.

A different vantage appears to show the same tree not looking very healthy in a postcard from the 1930s.

Alas, the tree is no more. Whether it succumbed to old age or the July 1995 microburst is not clear. John said that the island lost hundreds of trees in the microburst and it took him and the family weeks to clean up the destruction.

Momentarily dejected by this discovery, my spirits rose when John revealed that another part of our family legacy has indeed survived on the island. John mentioned having seen a photo in one of my earlier articles of John Boyd Thacher 2nd rowing a guide boat off the north shore of the island.

John led me along a path through the woods from the cabin to their boathouse.   As we entered the boathouse, John pulled away a large tarp and there she was.

The photo of JBT2 is from 1922, but it could be that this guide boat dates back to the Thachers’ earliest times on the island in the 1870s.   (Perhaps a guide boat historian would like to take on the challenge of determining the age of this boat!)

As we prepared to leave the island, I realized that I misspoke when I said we were the first Thachers in over seventy years to walk the island’s paths. John and Janet’s two-year old grandson, who now explores these shores, carries on the island’s name as legacy to their family and ours.