Over 130 years ago, the writer Nessmuk (George Washington Sears) visited my great-great-grandfather George Hornell Thacher on Indian Point in 1883.  Two weeks ago, I received an email from Will Madison, the great-great-great-grandson of Nessmuk.  Will is retracing the canoe journey of his ancestor and arranged to meet me at Indian Point this past weekend.  Please enjoy this video of our rendezvous and click at the end to support and share the campaign.  Or contribute directly at http://igg.me/at/50acres 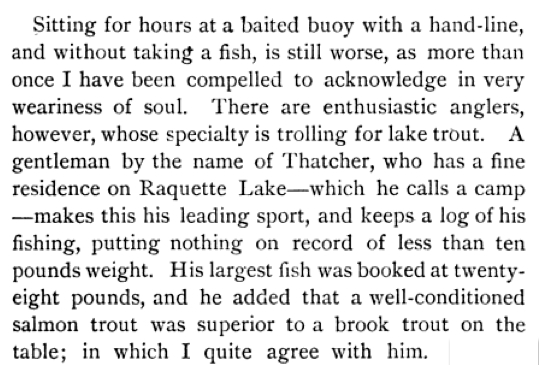 Whenever and wherever the original Thacher cabin was built on Indian Point is my holy grail.  Delving into the details of the few literary mentions of the cabin might yield clues.  This visit by Nessmuk was published in 1884; however, it makes no mention of when the encounter actually occurred.  I needed to learn about this man called Nessmuk.

Nessmuk was the pen name of George Washington Sears.  In his youth, he had been befriended by a young Narragansett Indian named Nessmuk (“wood drake”) who taught him hunting, fishing, and camping.  Later he took the Indian name for his pen name and its English translation for the name of his first canoe.   His book Woodcraft was first published in 1884 and remains in print today as one of the most widely read guides for the bushcraft and wilderness survival community.

According to the editor Dan Brenan in The Adirondack Letters of George Washington Sears, “At the age of 59, a little more than 5 feet tall, weighing less than 105 pounds, and weak with acute pulmonary tuberculosis, Sears decided to see if the Adirondack lakes and forests could improve his health. Since Sears was so small and weak, he could not carry the usual heavy guide boat over the carries between the lakes of the Fulton Chain. He persuaded J. Henry Rushton to build him solo canoes that he could carry.”

Nessmuk published accounts of his three trips through the lakes and streams of the Adirondacks  in a series of letters to Forest and Stream magazine: “Cruise of the Wood Drake” (1881), “Cruise of the Susan Nipper” (1882), and “Cruise of the Sairy Gamp” (1883).

The high regard and esteem in which Nessmuk was held by his readers is evident in the editorial published by Forest and Stream to promote the creation of a memorial for him.

So when did this renowned writer meet my great-great-grandfather George Hornell Thacher at his “fine residence” on Raquette Lake? Three clues appear to reveal a possible date.

Nessmuk’s habit appears to have been to write not about what transpired on the day he put pen to paper, but about his adventures in the preceding days.  This combined with the fact that often only the date of publication in Forest and Stream is known for most letters, makes it a challenge to date the actual occurrences of which he writes.

In a letter published on August 9, 1883, he describes his travels through the Fulton Chain prior to his arrival at Raquette Lake.  That letter does identify that it was written at Raquette Lake on July 27, 1883.  If one is to assume that Nessmuck would choose a day of idle and not a day of arduous paddling to compose his letters, it is likely that his letter of July 27th was written on the day he later described in his letter published on August 16th.

In a letter written while at Paul Smith’s and published August 23, 1883, Nessmuk tells of his visits to various private camps on Raquette Lake.

Notice the repetition of the text in bold within both letters.  I believe Nessmuk is describing the same day in two different letters.  Given that the Raquette House was directly across from the original Thacher Camp on Indian Point, I am fairly confident that the two men made their acquaintance on July 27, 1883.

The Sairy Gamp that carried Nessmuk to this rendezvous with my ancestor is described by Forest and Stream fisheries editor Fred Mather:

The Sairy Gamp on display at the Adirondack Museum.

I can only imagine that this fateful visit might once have been the topic of an encounter between Fred Mather and John Boyd Thacher, GHT’s son.  Although no evidence exists to corroborate it, I suspect such an encounter did happen and would have been described like this in Forest and Stream,

A fictional but historically accurate allusion to facts.

To entice you to seek out Nessmuk’s writings, I have reproduced one of his stories, 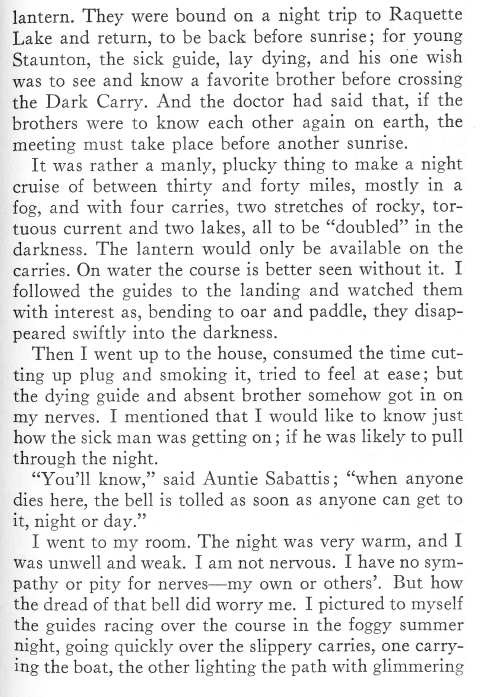 Enjoy one of his poems from his book of poetry Forest Runes published in 1887.